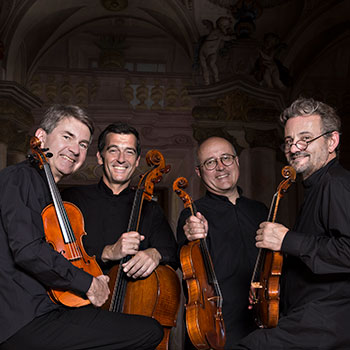 In 2020 the Artis Quartet is celebrating its 40TH ANNIVERSARY and is among the few quartets worldwide where the combination of all members stayed unchanged for 38 years so far. The Artis is regarded as one of the most eminent ensembles today continuing the tradition of “Viennese String Quartet Playing” at its best. Besides focusing on repertoire of the first Viennese School the recordings and performances of the AQ are as well highly acclaimed for the works of the late 19th and early 20th Century. T. Schulz from the German „Rondo“ Magazine wrote about:- „in the Austrian late romantic and modern repertoire the Artis Quartet is unbeatable at the moment“. Apart from the idea to present lively programs of all kind of styles to its audiences, which the Artis values in its residency at the “WIENER MUSIKVEREIN” since 1988, the quartet sometimes enjoy to perform series exclusively dedicated to one composer.
The presentations of series by SCHUBERT, MENDELSSOHN, WEBERN, BRAHMS, GOTTFRIED von EINEM and last but not least MOZART were well received in halls like WIENER MUSIKVEREIN, CONCERTGEBOUW AMSTERDAM, DE DOELEN ROTTERDAM, TEATRO LA FENICE VENICE and SUNTORY HALL TOKYO and the enthusiastic comments included: ”This was at last the concert that made you glad 1991 is Mozart year. Other artists try to imitate Mozart; these four are the real thing.” (Asahi Evening News/Tokyo ) ”or “The performances proved the Artis to be top class in the international chamber music league” (Kurier /Vienna). Founded in 1980, the Artis Quartet studied at the University of Music in Vienna and was coached by Hatto Beyerle and Alfred Staar. They won prizes at competitions in Cambridge, England (1983) , Evian, France (1984) and Yellow Springs, USA (1985) and studied as recipient of the Friedlander Fellowship with the LaSalle Quartet at the College Conservatory of Music, University of Cincinnati, USA 1984/85. In 1985 the ensemble began its international career performing at the most important venues and centres of music, including Carnegie Hall New York, Kennedy Center and Library of Congress in Washington, Suntory Hall and International Forum Tokyo, Philharmonie and Konzerthaus Berlin, Concertgebouw Amsterdam, Salle Pleyel and Théatre des Champs-Elysées Paris, Wigmore Hall and Queen Elizabeth Hall in London and Teatro Colon Buenos Aires among many others.

The AQ understands keeping up tradition as G. Mahler’s idea of renewing the fire and gave first performances of works by A. Zemlinsky, Gottfried v. Einem, Ivan Eröd, Richard Dünser, Helmut Eder, Erich Urbanner, Thomas Pernes, Gerhard E. Winkler, Thomas Larcher, Gerhard Schedl, Haimo Wisser, Wolfgang Kubizek, Alfred Huber, Harry Pepl, Tania Gabrielle French, and Antonio Pino Vargas. Gaining new audiences with interesting programms can happen as well at international festivals like Salzburger Festspiele, Wiener Festwochen, Schleswig Holstein Festival, Berliner Festwochen, Beethoven Festival Warsaw , Ravinia, Ludwigsburg, Lockenhaus, Turku, Naantali, Gstaad, Prades, Granada, West Cork, Dubrovnik, Bournemouth, Hong Kong, Paris, Kuhmo, Colmar, Schubertiade, Wien Modern and Salzburger Mozartwoche were the AQ had the pleasure to participate. The values of chamber music are performing, reacting and communicating in the context of the score. This was appreciated over 40 years not only among the quartet members but as well with valued colleagues like M. Maisky, C. Eschenbach, P. Entremont, P. Frankl, B. Berman, T.Fellner,T. Zehetmair, S. Vladar, S. Kam, F. Helmerson, M. Lethiec, N. Imai, L Power, J. Banse, I. Raimondi, S. Gabetta,
J.Menuhin, J.Pernoo, R. Stoltzman, members of the Alban Berg Quartet and Ensemble Wien-Berlin. The members of the Artis Quartet has preseved their musical legacy on over 40 CDs for Nimbus Records, Sony Classical, CBS/Sony, Orfeo, Accord, Koch/Schwann and Camerata Tokyo and has won such international awards as the ECHO KLASSIK, INDIE AWARD, GRAND PRIX INTERNATIONAL DU DISQUE/ACADEMIE CHARLES CROS, the PRIX CAECILIA, the DIAPASON D´OR, the WIENER FLÖTENUHR and the MIDEM CLASSICAL AWARD. The musical statements were not just made on audio but as well on video and productions with the quartet for documentaries, films and concerts were made for UNITEL, BR Alpha, 3 SAT, Asahi TV and ORF. In receiving the LULLY AWARD 2001 by concertonet.com the AQ was honoured for the seasons best chamber music performance in New York City. The pedagogical activities of the AQ members rank among their highest goals and the joy to pass on their experience and knowledge of performing for so many years to the younger generations brings back lots of energy you need to keep your performances fresh as in your first concert. The instruments played by the members are-
Peter Schuhmayer- Philipp Keller(1907), Johannes Meissl -A.Guarneri (1690), Herbert Kefer- J.B.Guadagnini (1784) and Othmar Müller- A.Amati (1573). The 3 Italian Instruments are on loan from the Austrian National Bank’s collection.. Artis Quartet-2020 www.artis-quartett.at