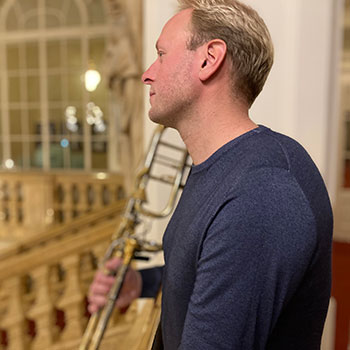 David Luidold was born in 1984. He studied Trombone in Graz, Vienna and Berlin with Hans Ströcker, Dietmar Küblböck and Stefan Schulz. In addition, he undertook further training in New York and Chicago. Luidold has been a member of the Gustav Mahler Youth Orchestra, European Union Youth Orchestra and the Paciﬁc Music Festival Orchestra.
In 2009 he was appointed Basstrombone in the Grazer Philharmonic Orchestra, Opera Graz. David Luidold has performed with renowned orchestras including the Berlin and Vienna Philharmonic.
Since 2015 he is teaching at the University of Music and Performing Arts Graz.
In 2004 David Luidold took over the role of Kapellmeister with the Stadtmusikkapelle Liezen.