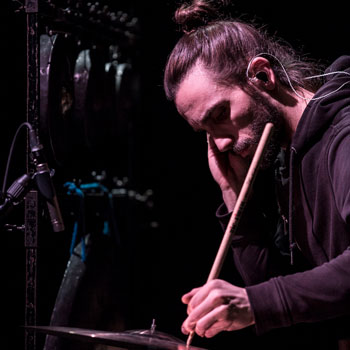 Born in the upper side of Austria Grilli Pollheimer grew up in an musical atmosphere based on jazz, traditional and classical styles. Later he studied classical percussion in the capitol of Styria in Graz at the local university. During his studies he began playing contamporary music with some established ensembles like Studio Percussion graz, Ensemble Reconsil Vienna or Ensemble Schallfeld and played at renowned Austrian and European music festivals. He deepened his interests for eastern music on trips to Iran, Israel and India. Several tours took him to festivals to India, Israel, South Korea, Serbia, Bulgaria, Spain, Scotland and many more. With his jazz trio Tribal Dialects he is also collaborating with some Indian musicians.