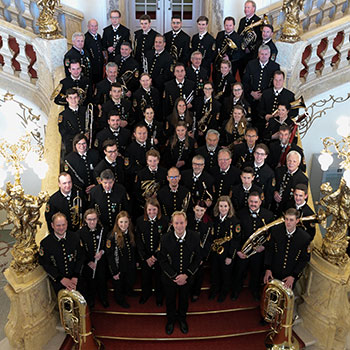 The Liezen music band was founded in 1873 and the first youth wind orchestra existed in the 1920s. The miner’s costume, introduced in 1966, goes back to the iron mining at Liezener Salberg as well as to the metal processing in Liezen that still exists today. The town band experienced a great boom with the beginning of the tenure of conductor Alois Grünwald in 1956. Numerous awards at concert competitions and concert tours to Dijon, Prague or Marseille shaped this era.

In 2004 David Luidold took over the role of Kapellmeister and developed the Stadtmusikkapelle Liezen into a very popular orchestra. Numerous commissioned works were premiered, most recently at the Innsbruck Promenade Concerts in 2015 and 2018, the Mid Europe 2013, the Styrian brass music gala in the Stefaniensaal in 2014 and the Salzburg Festival of Brass Music 2017. In two sold out performances, the children’s book “Valerie und die Gute-Nacht-Schaukel” was reinterpreted in 2019 with the Graz Philharmonic.